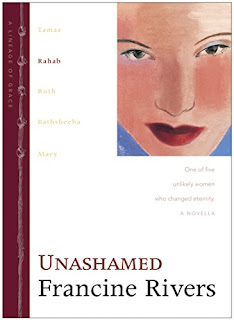 This is a retelling of the biblical story of Rahab.   If you don't know Rahab's story, she was a prostitute who lived in the walls of the city of Jericho.  All of Jericho had heard of the Israelites and their conquering God, so when they heard that they were headed towards Jericho, the people were very afraid.  But there was something in Rahab that wants to know the Israelite's God and to seek redemption, and she would do what she had to do to save her family, knowing that they would have surrender in order to be saved.  So when the Israelite spies entered Jericho, Rahab hid them in exchange for their promise to keep her and her family safe when the attack came.

I liked this retelling of the story.  Francine Rivers was able to give thoughts and feelings to the main characters of the story that made me see it in a new light and made me think of things that never occured to me.  The author gave a base for the love story between Rahab the prostitute and Salmon, the Israelite and showed the difficulty of how that relationship would be accepted and yet God made it happen and Rahab went on to be in the lineage of Christ.  I loved the redemption aspect of the story and how determined Rahab was to become a part of what she saw God doing.   I thought the author did a great job describing the historical part of the story which really drew me into the era and times.  At the end is a really indepth bible study that not only takes you further into the biblical account but also how it applies to one's life today.

Unashamed is one novella in a series called the Lineage of Grace about 5 unlikely women who changed eternity.  It can be found as a stand alone or bound with the other 4 novellas as one book.  The dedication reads:  Unashamed is dedicated to women who think a past of mistakes ruins any chance of a joy-filled future.  Turn to Jesus and experience the wonders He has waiting for you.

I think I would enjoy this book. Will put it on my list. Thanks!

This sounds good. We tend to zoom past those verses about her without thinking much about her personally.