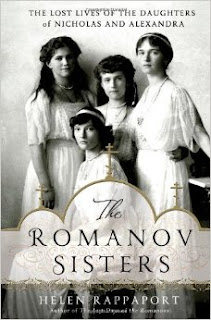 Born to privilege and royalty, they were the 4 oldest children of the last Tsar and Tsarista of Russia. They were greatly loved by their parents who raised them with deep religious and family values. Told from collections of diaries and letters, the story of their short lives is filled with insight into who they were as people, their upbringing by a very religious yet overly protective mother, and their insights and thoughts into what was going on around them. In their short lives they saw a lot, including WWI, the last days of Imperial Russia and the beginnings of the Russian Revolution which effectively took their lives. We learn of their childhoods, their care for their brother who was the only heir to the throne and who suffered horribly from hemophilia and how they handled their mother's sickly constitution which brought long separations from her. We learn of their hopes and dreams, their deep concern and care as nurses and visitors of the wounded soldiers during the war, and their extreme boredom and fear and courage in the face of their captivity and later their murder. We also learn a bit about their relationship to the controversial Rasputin as their mother relied on him more and more to help young Alexy with his bouts of almost dying from his disease. It was all a very sad time period in the history of Russia.

I have always been intrigued with this time in Russian history and thoroughly enjoyed this perspective through the eyes of the 4 Grand Duchesses. It is a sad tale indeed. Refreshing to read was the great love of each other this family had. Insights into their daily, very sheltered lives was interesting as was how they handled everything that came upon them because of the political turmoil of the time. Intelligent yet not worldly, they seemed younger than they were but were so open to people and those around them. They had great responsibility yet the general public were not so open to them as it was so important that the Tsaritsa produce a male heir. Yet when he finally did come, he was born with an incurable disease that ran through royalty, and a lot of their childhood was spent hiding that fact and taking care of their very sick brother. As they got older because they were not exposed to the general public so much, sentiment was against them, and they didn't really know how to behave "royally", if that is such a word. Their story is at first interesting, and heartwarming and then when Nicholas abdicates in the mistaken belief that it would be best for their family and for Russia, it turns heartbreaking as the Russian Revolution brings the nightmare of their captivity and eventual death.

As is usual with non-fiction books of this sort, I find, there were some long run on sentences. And I think this read took me longer than usual because I never did get the hang of pronouncing the long Russian names that were throughout the book. But it was a great read nonetheless.  I rated it 9.5/10

Oh, I must read this. The Romanov family is high on my list of interests.

Thanks for highlighting this book.

I always enjoy reading first hand accounts like this. This family is so intriguing and such an interesting time in history.

This part of Russian history has always fascinated me. I am going to have to get this book and read it! Thanks so much.

Well you KNOW my daughter Claire (now a senior in high school!!) has studied Russian since 7th grade and so I am definitely going to look for this book for her! In fact, she plans on Russian Studies as one of her college majors!! Thanks for the great review, Susanne.

No FFF today ? I had lunch already, lol !