The Couple Next Door by Shari Lapena ~ Book Review 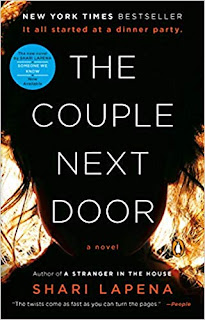 Anne and Marco Conti are a seemingly happy couple that live in a duplex in a good neighborhood.  They have a beautiful 6 month old baby girl named Cora and Marco's business is doing well.  Everything seems to be going well for the young couple.  They are friends with their next door neighbors and have been invited for a private, "no kids" dinner party for the husband's birthday.  Unfortunately, their babysitter has canceled and now they are in a dilemma.  Marco came up with the idea, because they live next to each other in a duplex, that Cora can just stay in her crib asleep while they take the monitor with them to the dinner and then they would take turns every half hour checking on Cora.  Anne is not in agreement with this idea but finally gives in to Marco.   As the evening progresses, the baby checks seem to be going okay but by midnight Anne has had enough and wants to go home but Marco is having a good time, too good of a time enjoying the attention of their female host.  When Anne finally gets him to leave the party, Anne's greatest fear is realized as they discover that Cora is missing.  Immediately they are under suspicion, who leaves their baby alone and goes to a dinner party even with a monitor?  The whole neighborhood is shocked.  But as Detective Rasbach unfolds the layers of what actually happened, it becomes apparent that both parents have been hiding secrets from each other but is that enough to make the jump to commit a horrendous crime?  Or has this just been a horrible act against an innocent couple who made one bad decision?  And what about all the neighbors who have their own secrets?

For the most part, I enjoyed the mystery element to this book, however it did have it's ups and downs for me and some were insurmountable.  It is definitely filled with twists and turns throughout that keep you turning the pages.  Some of the twists I figured out but then another would come along that surprised me.  The thing that I found difficult with the read, however, was that there was not one likeable character to root for.  As more and more is revealed and the suspicion of everyone deepens, my dislike for them all grew.  The writing suffered from a bit of clunkiness in parts and repetition at times that kind of broke up the flow.  And there is one character that is prone to dropping f-bombs and in one instance coupled it with the Lord's name at which point I almost quit the book for that reason.  I HATE when  that is done and in my point of view there is NEVER a reason for it.  It's never done with any other historical/religious leader and I am highly offended that this author thought it is ok to do it with Christianity's Son of God.  Had it happened again, I would not have continued on no matter how good the story was.  The rating from me most definitely reflects my deep offense at that.  And I will probably not read another from her if that is the "surprise" I will be getting.

This book is SO similar to one I read a few years ago! Same plot, same premise. I agree that the F word should NOT be used but so many secular authors use it! It's so low class and unnecessary! and coupled with God's name...NOT ok!! I'll pass on this one. 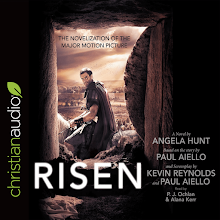 Liturgy of the Ordinary Audiobook
by Trish Harrison Warren

The Scroll
by Grant R. Jeffrey and Alton L. Gansky

Here's the Story
by Maureen McCormick