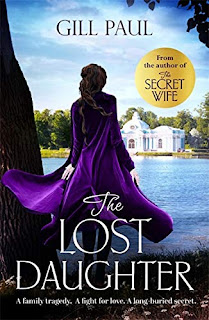 In 1918,with the Bolshevik's taking control of Russia,  the Romanov's are moved to a small house in Ekaterinburg and remain living in captivity.  Maria is a friendly 19 year old with a fun personality but has a times felt that she is not loved by her parents as much as the other Romanov children are.  As time drags on in the house their days drift back and forth between mind numbing boredom and heart stopping fear.  Through it all  Maria manages to still be friendly with a couple of the younger guards.  Little does she realize in her naivety that her innocent flirtations will reap consequences that will have a profound effect on her life.

In 1973 Australia, Val Doyle has struggled all her life in her relationship with her harsh and abusive Russian father.  When the nursing home calls her with some strange & disturbing things her father has said, Val breaks her long time estrangement to go see him to try to decipher what he means.  But while there he is distraught and repeats to Val what the nurses heard:  "I didn't want to kill her".    Stunned, Val can only surmise that he is referring to her Asian mother who disappeared without a word when Val was only twelve years old.   When her father dies, she tries to solve the mystery of the disappearance of her mom, Val finds there is more to the story than she ever imagined and it all centers on an odd collection of photographs and a Faberge box found in her father's safety deposit box.

This book is a prime example of why I love historical fiction.  It was so well researched and written.  I've read quite a bit about the Romanovs, both fiction and non-fiction and still it taught me pieces of Russian history I didn't know a lot about and yet managed to involve my emotions every step of the way.  This novel takes historical events and supposes a different outcome.  The demise of the Romanov family came with some speculation that some of the children had survived the brutal murderous event.  This fictional story supposes that Maria had survived.  It follows her life as she tries to survive, remain hidden and get over the horrible, heartbreaking events she witnessed.  As she finds love and builds her family Russia is once again in turmoil.  The author takes us through Leningrad when Stalin took over and built communism.  It takes Maria's family through the heartbreaking siege of Leningrad when Stalin basically abandoned his people to starvation.   It was hard to put the book down and had me on the edge of my seat as the author wove the historical and the contemporary stories together.  All my emotions were involved.  It was fascinating, captivating and I cried my way through several parts of the story.  It is a story of survival, courage and love.

I will put a warning out for domestic abuse within the story and ,of course, the violence of the Romanov murders for those that would be triggered by that.