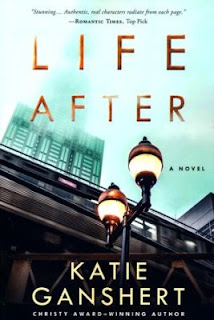 Autumn Manning was simply living her life, coming home from work one day when a terrorist's bomb rips her train apart.  Twenty two people died, and Autumn lived.  Now one year later, the anniversary of the explosion is drawing close and Autumn doesn't want to go.  Since being found alive, she has wrestled with guilt, not only at being the only survivor, but also because she was misidentified at first, and another family thought they had hope and she feels she ripped it away from them.  As Autumn tries to piece her life back together, she struggles with leaving the house, with being obsessed with the people who died in the attack and with all the unanswered questions.

Meanwhile Paul Elliott, is also trying to move on.  His wife died in the attack on the train.  But a glimmer of hope was offered to them when it was thought she was the only survivor, only to be taken from them again when it was discovered there had been a mix up in the identification.  Now he just wants to get past this anniversary and move his family on.  But his 12 year old daughter wants to keep remembering and Paul is terrified she will discover what he has been trying so hard to bury.  And now circumstances have brought the very woman who was mistaken for his wife back into their lives.

I loved this novel.  It is hard to review this story due to it's depth of storytelling.  I don't want to give anything away.  It is such a deep story full of complex layers.  It deals with survivor's guilt, truth and lies, forgiveness, grief,  and purpose of life just to name a few.  The character's are so rich and well written.  My heart was torn for them all throughout the story and the author was able to really delve into the emotions and struggles from several angles of those who have survived something like this or to be a family dealing with with the loss of a loved one due to terrorism (or really any tragedy that claims lives due to another's actions).   I was really affected by this story and the author's insight and ability to really make me feel invested in the characters and what they were going through.  It was one of those where I couldn't pick up another book for a few days because I couldn't stop thinking of this one.

I've never heard of this book!! I'll have to look for it!