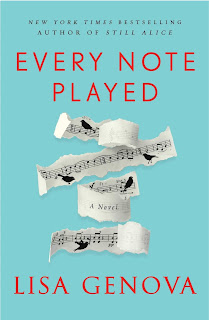 Richard is a very well known accomplished pianist who has played the starring role with symphonies all over the world.  He has spent a lifetime honing his craft to become the best.  Music and piano are his life.  He spends up to 10 hours a day practicing, to the detriment of his family life.  Not that he notices the time.  When he's at the piano all time fades away as he is carried away by the music and the perfection of never making a mistake.

Karina is also an accomplished pianist from Poland.  She and Richard met at a music college in America.  In ways she was technically even more better than Richard naturally feeling the music where Richard had to work at the emotion.  When he finally asked her out they clicked immediately, their love for classical music being the foundation.  But then Karina took a turn in her choice of music pursuits when she fell in love with jazz, something that Richard could never like.  He didn't even consider it music.  After marriage and a child, Richard moved the family to another city to pursue his career and so the rifts within the marriage started to build to the point they became irreparable, each blaming the other for the breakdown.

And now Richard has ALS.  As the disease claims him piece by piece, with no one else to do it, Karina becomes Richard's caretaker.  Both are filled with the regrets of the past but don't know how to move beyond it.  But time is not on their side and both of them must take some hard looks at the role each played to get to where they are today.

My Thoughts:
Another heartrending story from Lisa Genova of the lives involved and ruined with a horrendous disease.   This author has a beautiful gift of being able to give a voice to those suffering from a horrible disease and not only translate what they are going through physically, emotionally and mentally but also those of the family and people around them.  The story is touching and maddening, very heavy at times.  How can it not be?  But I read it to glean the knowledge of what those who face these diseases live with.  Lisa Genova is able to really make the reader feel the emotions and struggles.  I cried several times throughout this story as I felt for what Richard was going through as the moving paralysis claimed more and more of his body, even as his character was arrogant and unlikeable to me in the beginning.  But as is with life things were revealed that made me think a little more why he might have come to be that way.  My heart went out to his and Karina's college aged daughter who basically grew up without her dad and now must also face his dying.  It's a story that puts a human face to the big ALS "ice bucket" awareness challenge of the last few years.  It's a story of loss and regret, suffering, looking for hope in the face of hopelessness, facing one's own roles in the state of relationships and the offering of mercy, service and forgiveness.

This sounds intense. She must be a great writer to be able to capture the struggles and make it so believable. Love reading your reviews, Susanne.

I loved this book. She's a degreed neuroscientist so really knows her stuff. And she's so interesting to talk to. I was so thrilled to meet her on the streets of Chatham about 3 years ago. (Cape Cod). Wonder what she's working on next???

The Sun Does Shine
by Anthony Ray Hinton

The Brilliant Life of Eudora Honeysett
by Annie Lyons

Dream When You're Feeling Blue
by Elizabeth Berg

The McAvoy Sisters Book of Sercrets
by Molly Fader