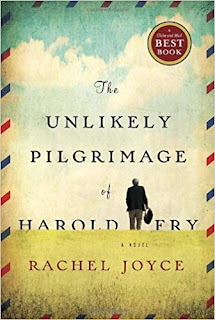 After receiving a note in the mail from a former co-worker that is saying her goodbyes as she faces a terminal illness, Harold Fry  writes her back despite not having had communication with her for many, many years.  But as he goes to post the letter in the mailbox, he just can't bring himself to drop it in.  After a conversation with a young gas station attendant about hope, Harold makes an impulsive decision to give his friend hope, by walking all the way across the country to see her.  But Harold didn't quite think through everything this decision would entail.  He has no proper footwear or coat, no maps or phone.  His wife does not understand what he is doing.  But he knows he must keep going, because he is trying to save his friend's life.

This story was an interesting and heartfelt look into the human heart.  As Harold walks  he has nothing to do except think and he faces his own thoughts, emotions and history.  As does his wife back at home.  It's a subtle coming to terms with aging  and what one's life has become because of your past decisions and what one's life can still be.  It's also a story of perspective and how we remember events in our lives.   As Harold walks he he comes across many interesting characters who both add to his walk but also those who are detrimental.  The book drew me right in as I kept the hope that Harold would indeed make it on time to Queenie and that somehow against all odds this walk would save her.  But it also drew me because, strangely, in so many ways, Harold is so relatable.

The story is very introspective but the author brilliantly unfolds the past that has led Harold to this point.  It is a study in human nature in many layers not just of Harold but all the people that his journey brings him across.  About 3/4 of the way through, just when I thought I had enough of the introspection, the author reveals aspects of Harold's story one after another that had me crying  and then crying again and yet again.  I thought this was a lovely story that was very well done, humorous and subtly thought provoking.

I had not heard of this author or book, but they sound compelling.

This sounds like a story I would love. I'm putting it on my list. Thanks for the review, Susanne.

I read this book a while ago and enjoyed your review reminding me of the beautiful story.