Promise Me This by Cathy Gohlke ~ Book Review 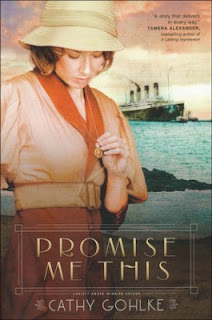 Making plans to move to America from England, Owen Allen finally confronts his spinster aunt (who has taken him and his sister Annie in when his parents died) with his plans. But those plans involve getting established in America before he can send for his little sister Annie. Because of his aunt's manipulative influence, he moves Annie to a boarding school, with the promise he will send for her within the year as soon as he earns enough in his American Aunt and Uncles gardening business. Booking passage on the Titanic, Owen takes a young stowaway under his wing on the ship when he recognizes the young boy has no one. When the Titanic sinks, Owens makes the ultimate sacrifice and Michael makes it to America with nothing except the vow to Owen to get Annie to America and coat pockets full of Owen's seeds, shoots and garden plans to start getting Owen's dreams to fruition. Annie is devastated by her brother's death and though now connected to Michael through the promise she struggles with forgiving him for living when her brother did not. As Annie tries to deal with her grief and move on with her life, and Michael continues saving to bring Annie over, circumstances they never thought possible conspire to keep her away from the life in America her brother dreamed they would have. When Annie disappears in the midst of WW I Michael takes his own life in his hands to cross the ocean yet again, this time back to England to find Annie.

I really enjoyed this story that involved not only the Titanic but WW I which followed soon on the heels of the sinking of the ocean liner. I'm always up for a story that involves the Titanic and this didn't disappoint in it's telling of that historical part. The young stowaway made an interesting addition to the tragedy that is the Titanic . I haven't read too much on WW I and the story brought the horrific battles in France and the part that VAD nurses played in tending to the wounded on the front lines to life. It all brought out some deep emotions in me in it's descriptions both of the sinking of the Titanic and the aftermath to both the survivors and the families and the devastation of this war.  There was some really nice character development and it was nice to see their growth and change from the beginning to end of the story. The only character that I questioned a bit was the aunt and her seeming unchallenged ability to wield power over whomever she basically chose even after her death. But it definitely made for a page turning aspect to the story. I loved the themes of sacrifice for another and the exploration of what that means in the life of a Christian, survivor guilt, anger, forgiveness and fulfilling your promises that this Christian historical novel presented. The only part I didn't enjoy was the addition of some sentences in French as some of the French characters spoke even though they were basically translated within the next sentence or two. I found it frustrating and ended up basically just skipping those sentences (which were only in a few of the chapters) and found they could have just been eliminated altogether.

This sounds good. I think I have it on my TBR list - I might have even bought the Kindle version - will have to check.

Thanks for the review! This sounds like a riveting story, Susanne. Going to keep an eye out for it.