My Secret Sister by Helen Edwards and Jenny Lee Smith 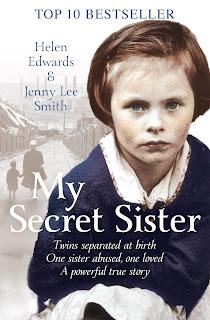 This is the memoir of twin sisters who didn't even know the other existed until they were in their 50's.  Separated at 6 weeks old in post war England,  the two lived lives that couldn't have been more different from each other.

Jenny, the twin who was given up for adoption, was raised as an only child with parents who loved her and doted on her.  Her father, who loved to golf,  introduced to the sport when she was three and both parents supported her as she pursued the competitive side of the sport.  Even after her father passed away, Jenny's mom made sacrifices to make sure that Jenny was able to go on and become a high ranking championship golfer who competed in the LPGA.  Though happy and knowing she was loved, Jenny always felt that something was missing and attributed it to being an only child until she inadvertantly found out she had been adopted.

Helen, was kept by her mom and grew up with a brother George living close to her grandmother and aunts, uncles and cousins.  Though she was surrounded by family, hers was a very lonely childhood as her father was horribly physically abusive towards both her and her mother.  He was king of the household and made sure they knew it every chance he got constantly telling Helen everything was her fault.  And added to that was her mother's psychological abuse  and manipulating that held Helen in it's grips until well after her mother had passed away.  Helen grew up with her parents engaged in a daily battle where her mother would taunt and goad her father to violence that most times ended up with her taking the brunt of consequences.

Though she found out as a teen that she was adopted, Jenny didn't started to look for her birth family until later on in life. When the two sisters connect and they look for answers as to why they were separated they unearth as family legacy of lies and deception.

So many mixed emotions while reading this book.  It was a good story but and oh so hard read.  Helen's abuse was horrendous and I had to stop and pause throughout the book as it was so hard to read about.  That she turned out to be a loving, caring adult is really a miracle.  I was torn reading the story of both girls because the story was laid out in a way that went back and forth between the two as they told of their growing up years.  I'll be honest and say reading Jenny's story was almost difficult in the sense that hers was such an easy life compared to Helen's and almost felt like fluff (insert myself with guilt pangs for feeling that way) and I felt I wanted to rush through it to get back to Helen's story.  Not that I wanted to read about the abuse but I wanted to read that she made it through, that she was able to get away, that she finally was able to leave it behind her.   I did learn a little bit from Helen's story about how someone who is abused and manipulated ends up staying in the situation.  But I found myself almost talking out loud in frustration to the grown up Helen as both she and her husband at the time continued to make decisions that let certain things continue happening without standing up for themselves.  But Jenny's story too, did have some struggles as she dealt with feeling cast aside and rejected by her mother and what she perceived to be a happy family that got rid of her as she had no idea of the abuse that went on in her sister's family.  The last part of the book of course was the best part as Jenny and Helen finally find each other and share their inspirational bond and the strength and faith in God they have to not let bitterness define the rest of their lives.

Because of the frequent abusive situations within Helen's story, I feel that a warning should go with the review of the book for those who would be triggered and/or sensitive to the material.

I agree--that would be a hard read for a lot of people.

I get that this could be triggering, but this edition of the book does warn in the blurb: "One sister abused." I will keep an eye out for this book if it crosses my path at a library or a book sale to read, but I worry that I will have the same reaction of rushing through Jenny's part of the story to find out what is going on with Helen.