The Space Between Words by Michele Phoenix ~ Book Tour and Review 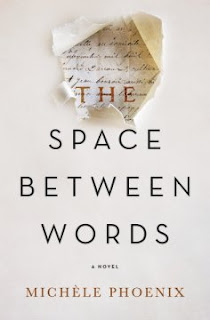 Publisher's Description:
"There were seconds, when I woke, when the world felt unshrouded. Then memory returned."

When Jessica regains consciousness in a French hospital on the day after the Paris attacks, all she can think of is fleeing the site of the horror she survived. But Patrick, the steadfast friend who hasn’t left her side, urges her to reconsider her decision. Worn down by his insistence, she reluctantly agrees to follow through with the trip they’d planned before the tragedy.

“The pages found you,” Patrick whispered. “Now you need to figure out what they’re trying to say.”

During a stop at a country flea market, Jessica finds a faded document concealed in an antique. As new friends help her to translate the archaic French, they uncover the story of Adeline Baillard, a young woman who lived centuries before—her faith condemned, her life endangered, her community decimated by the Huguenot persecution.

“I write for our descendants, for those who will not understand the cost of our survival.”

Determined to learn the Baillard family’s fate, Jessica retraces their flight from France to England, spurred on by a need she doesn’t understand. Could this stranger who lived three hundred years before hold the key to Jessica’s survival?


My Thoughts:
When I first got this book for review, it wasn't really a book or author I had heard of before.  The description vaguely intrigued me so I ordered it.  At first taste I thought maybe I would have a hard time getting into it.  There are some french words and places in Paris mentioned.  Never having been fond of reading or trying to sound out the French language this made me think I might have chosen something that wasn't quite for me.  But boy, once the story got going I could not put this book down.  I didn't know a lot about the Paris Bataclan attacks of 2015.  For some reason I didn't really pay attention to the news at that time.  I think I might not have wanted to know as that was the year my daughter had travelled to Paris and I just didn't want to be consumed with thoughts of "it could have been her had she gone a few months later".  I don't know.  Anyway, this story really opened my eyes to the horror of what those attacks were.

I've always shied away from reading about matyrs and Christian persecution as it deposited fear into me.  In a way, it was a step of faith for me to read this story.   I had never heard of the Huguenots of France before but after reading this I have come to realize that their story and that of any story of persecuted Christian faith is important to tell and when told well it can leave a deposit of encouragement and faith and resilience.  I found this story hard to put down.

By interweaving the ancient story of the Huguenot persecution and the more recent Bataclan attack, this new to me author explored the questions:  "Can someone who witnesses unthinkable evil and survives the unbearable, who loses everything, can they not only survive but find happiness in life again?"   "Can one live beyond the fear to realize their story is not over and find the courage to continue their story and fight for their ending?"    For me, the story of these two women, modern and ancient, and how they answered these questions for themselves was an important one to explore.   The story also looks at dealing with grief, PTSD, the importance and blessing of friendship, dealing with guilt, faith and belief in the midst of evil and taking steps forward.

Though the pacing of discoveries by Jessica and Grant was quite quick in this story for story telling's sake, I thought the author did a great job in helping us not to forget this history and told a wonderful story of courage, resilience and faith.

Thanks to BookLook Bloggers for providing this book free of charge for my honest review.  All thoughts and opinions are mine and I was not required to give a good review.

Wow, that sounds like a really good book. I will have to look for it. Very nice review. I lost my log in for Book Look and haven't review a book for a while, but would sure like to get back into it. I am now reading and reviewing books for the school district I teach for. Hope you have a great week!

OMGOSH! I would LOVE This book!!!! I am checking now online to see if my library has it! (although I just read The Alice Network set in France so.....) but yes...i would LOVE to get this. I'm reading another one now that i can't put down and i still have one waiting for me.....i love reading!