Secrets She Left Behind by Diane Chaberlain ~ Book Review 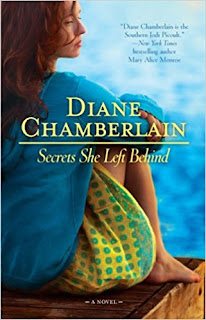 18 year old Maggie Lockwood has just been released from prison for her actions which led to a fire at a church that claimed a life and horrified the small town she is from.   Going elsewhere is not an option so she must learn to live in a town of people who's feelings toward her range from anger to horror to hate.  But no one hates her more than Keith Weston who's last year has been one filled with pain and suffering due to the fire.  Keith and Maggie grew up together and used to be friends but the fire burned him horribly and with the pain of the last year, he must now face life badly disfigured.  The only person who helps him to get through his days is his mom Sara.  But Sara left the house to go somewhere, no one seems to know where, and has not come home.  As hours turn into days and days turn into weeks, Keith must deal with her not returning and all the questions and feelings that raise.  Maggie's parents have offered to let Keith stay at their home but there is no way he's going to do and be so near to the person he hates.   Then Keith meets a girl who looks beyond the disfigurement to who he really is and he starts to think he just might be able to get through this.

The premise of this story sounded so good.  How the author explored how a young person who makes a horrible decision must face the ongoing consequences of that decision and what follows was really good.  Also how the people most affected by what happened and everything they also were feeling and struggling with as Maggie was released and back in town was really good.  And the mystery involving the disappearance of Sara drew me in.    Where the story derailed for me was the constant gravitation toward teenage sexual encounters.  I understood the need to develop Keith's relationship with the girl, and being a secular story, I didn't expect it to line up with Christian moral guidelines, but the constant encounters I thought really distracted from the more important elements of what this story was about.  I thought it could have risen above that so much better.  There also was a huge element of the story involving sin in church leadership that was sad and disheartening that the blurb on the back totally didn't let the possible reader in on so the story ended up being about more than just what was happening with Maggie and the fire and it's consequences.

I am rather tired of stories that make the religious person or institution embody the worst of human nature. And for the points you made, I'm sorry the author missed the opportunity to strengthen her key message.

this doesnt sound anything at all like most of her other novels. sad when an author focuses so much on sex and the negative aspects of church, etc. Although with all the horrible things that HAVE git the media regarding certain Christian figures who yes do fall off the pedestals people put them on, you can see why a writer might gravitate towards that. i guess i will skip this chamberlain one!!