Secrets of a Charmed Life by Susan Meissner 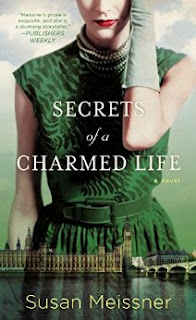 Kendra Van Zant arrives at an old English cottage in Cotswald, England to interview famous watercolor painter Isabel McFarland who is actually celebrating her 93rd birthday.  Isabel is a survivor of the London Blitz but up until now has never talked about it so it was a bit of a surprise that Kendra's professor was able to secure an interview for her.  As a visiting student at Oxford studying history, Kendra is writing a paper for the 70th anniversary of VE day with a chance for it to be published.  Kendra firmly believes that information is only half the story of an event and personal experience of people involved is the other half.   She's done her research and has her questions all lined up but before she can even ask any of them Isabel drops the bombshell that she is not even who everyone thinks she is.   And so starts the story of 2 young sisters who lived in London at the time of rumors of war in the 1940's.

Emmy Downtree is only 15 but has her dreams all planned out.  She has been drawing brides and bridal dresses and wants to design them.  When she has a chance to work in a bridal shop she takes the job even though her mother is very opposed as she needs to help look after her  much younger sister Julia while her mother does whatever she does when she is gone from them.  But Emmy's ambitions and dreams come to a halt as London orders the evacuation of all children to foster families in the country side to keep them safe from the threat of bombs.  Though she tries to fight it, Emmy is shipped off by train with her sister.  But she is determined to make her once in lifetime opportunity a reality and sees only that she has no other choice and steals away in the middle of the night to make her appointment with a designer in the city.  But this determination will have ramifications not only for her but for others in her life as well.

I loved this book.  It  grabbed me right  from the beginning.    As the story of the two sisters starts to build it was very easy to lose myself into the story.  A portion of the story towards the back is told in letter and diary entry form and though this is a format that I usually really do not like in books it worked for me in this story.    The author was really able to convey the terror and emotions of two young girls going through the Blitz as well as the adult characters and what they were going through.  The long term ramifications of trauma were really presented in a believable and realistic sense.  I really don't know a lot about the war as it affected England so I really learned a lot.  I didn't even have any idea that children were evacuated out of London.   As I was reading and the Blitz was happening I wondered what on earth the title had to do with the actual story, they seemed on opposite ends of a very large spectrum.  But under the reader's guide author  Q & A she poses the question "if there really are secrets to living a life that has happily ever after written all over it...and to being able to have everything you've always wanted".    In the beginning both Emmy and Kendra seemed to have their p's and q's all lined up for that life.  But as the story shows some things you just cannot control and it's the very choices during those times that may be the ones determining where your life goes.

Beautiful writing, realistic emotions,  wonderful characters earns this story a 10/10 for me.

I loved this book! On another note, in The Lion, the Witch, and the Wardrobe by C. S. Louis, the first of the Narnia books, the children in the story are at someone's house after being evacuated from London during the blitz. I think C. S. Lewis took in some children as well.

You've never read the chronicles of narnia???! that is why the children had to leave London and go live with their uncle who had the wardrobe!!! because of the evacuation!

Going on my list as well. Have you read Good Night, Mr. Tom? That is about the same time period - evacuation of London during WWII. Another very good book! Thanks for the review.

This is definitely going on my list. I enjoy books that inlcude the diary/letter format. As always, I love your reviews, Susanne.