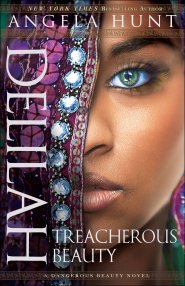 We all know the basic story Samson and Delilah.  But the bible itself gives a very little background to the infamous woman who brought Samson, the judge and strongman of Israel, down.  In this retelling, Angela Hunt has written the story of a young girl who's mother marries a Philistine business man and takes them from their home in Egypt to his home in Gaza.  Though her stepfather is loving and kind to her mother and herself, Delilah's stepbrother is another story.  Cruel and vindicitive, he takes every opportunity to make Delilah feel unwelcome.  When her stepfather dies suddenly only a few months later, Delilah's life changes for the worst as her stepbrother sells her mother as a slave and turns her into his prisoner, severely abusing her.  But Delilah is determined to make an escape and find her mother and buy her back so they can make their way back to their homeland.  Easier said than done, but an opportunity presents itself and Delilah grabs her chance.  But she must go without her mother as she has nothing.  When some Jewish traders take pity upon her and offer her help she goes with them vowing to someday return for her mother.  In her travels she comes across the legendary Samson, in the years to come knows she must turn to him to help her with her plans.  But she doesn't count on actually falling in love with the strongman and it all comes to a head when she must make a choice between love and ambition and revenge.

I really liked this story of Delilah.  Who has not wondered what was her story was and how she could do such a thing?  Not much historical or biblical fact is found about Delilah other than her betrayal of the mighty Samson.   But what in her past would bring her to a point that would make her go down in history as one of the greatest betrayers of all time?  Angela Hunt has imagined a young foreign girl viciously hurt by the circumstances of her life and trying desperately to put her life back together so when she sees opportunity she takes it.  She has taken the premise that "human nature demands that we rationalize our actions" (author's notes: pg 341) and woven both the motivations of Delilah and Samson through that.   The time of the judges of Israel and Samson's background was interestingly woven into the story and I learned a few things about that time and how women were treated.    The story is told in alternating chapters both from Delilah and from Samson's points of views.  And the same as with the building of the other biblical character's in this series, the author stuck close to the biblical story and to human nature and worked out from there.  Again it is to the reader's advantage to read the author's notes at the back that explain how the story was built.

I gave this third installment in the A Dangerous Beauty Novel series a 9/10. 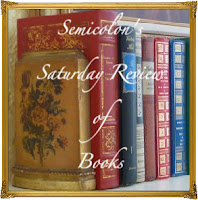 oh ive read a. couple of her books and although VERY fictionalized i really enjoyed them. will look for this!! great review!!

Amazing review! I have never read her books, seems like I gotta check them out!
Check out my this week's review on Accidently on Purpose by Jill Shalvis Here!