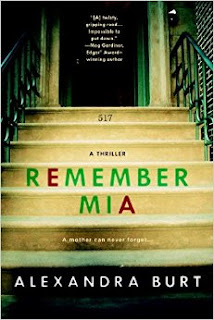 Baby Mia, aged 7 months, has gone missing from her parent's home without a trace. Gone are all her clothes, bottles, diapers, everything. But what makes it even stranger is mom, Estelle Paradise, was home at the time and all the doors were heavily locked. Then Estelle turns up miles from home in her car at the bottom of a ravine with life threatening injuries. And amnesia. She at first doesn't even remember that Mia is missing. But time is of the essence for her to regain her memory. Is it just convenient that she has lost her memory or is something else going on? Some of her injuries are questionable as are most of her actions as the story is revealed. What on earth is happening and where is Mia? When Estelle is checked into a hospital and under the care of a psychiatric doctor, she must dig deep and find courage to face some things so that she can remember. Did she hurt Mia and do something with her? As time is ticking and is of the essence, Estelle feels the pressure to remember and find answers not only to locate Mia but to vindicate herself as both police and the media put her under scrutiny and find her story severely lacking in believability.

This was an emotional, twist filled psychological thriller that explored the depths of depression and guilt that post partum depression can bring. As Estelle delves more into her past few days we start to see an unreliable narrative and picture of a young mom who was facing severe depression and had no support. Though I never struggled with PPD the profound feelings of guilt she carried for not being a good mom were very emotional but there were also times of boredom in the reading too as descriptions of her mental state got a bit repetitive at times. In her state of not being able to rationally deal with things I found I grew frustrated at some of her lack of communication skills when it came to trying to tell various police officers what she knew and sometimes at her lack of inaction or seeming lack of concern. The book has lots of flashbacks as Estelle's story comes to light piece by piece which kept you guessing at to what could have really happened and changing your mind as to what you thought happened. Because of all the flashbacks and things happening in real time I did get confused at times as to how much time had actually passed in the story. I found interesting that smells played a part in Estelle remembering some things as scent is a big trigger for me too. There was one section that dealt with small town police that had me wondering if they really would be that negligent to thoroughly check something out. A few f-bombs scattered throughout seems to be the thing with this genre.

This was a page turning read in that I just had to find out what happened but slogged along at points to get there. I gave it 7/10.

Review is linked at Semicolon Saturday Review of Books.

I might look for this one. Never heard of it!! I like a good mystery but not ones that get bogged down. I have known a couple of people who struggled with PPD and it is NOT pretty. And yes, small town cops are usually inept in my experience. lol at least in the USA. lol

Informative review Suzanne. I have a pile of books to be read at the moment but if I come across this one it could be adding to it! lol