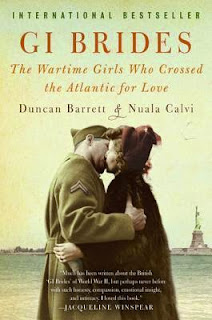 During WWII American GI's were stationed all throughout the UK.  Over 70,000 of these GI's met and fell in love with the British girls, married them and brought them home to America after the war was over.   GI Brides is the true account of 4 of these young British women who met and married American GI's and bravely crossed the ocean leaving everything behind to be with the soldiers they loved.

I found this story quite fascinating.  One of the authors is actually the grand-daughter of one of the women featured and the other three were picked from interviewing about 60 other GI brides.  These stories are not always happy ones.  These four women did not have the fairy tale lives that they thought they would when they left all behind to follow the men that they loved.  I thought the authors did a great job in describing England during the time of war and the fear and oppression they lived under.  The hardships that came during wartime: the hard rationing, the danger, the trauma of being constantly bombed are set against the backdrop of meeting the handsome GI's, falling in love and the lure of a better life in golden America.  It was interesting to read of the women's trip across the ocean and how they were treated on the boats and how they were treated in America.  In Britain the GI's were disliked and resented because they were taking the British girls from the British guys but in America the brides were resented because they had taken the available men.  The language barrier was at times funny.  Even though they spoke English, it was not the English of America and what meant something overseas certainly did not translate across in America bringing embarrassment.  The lives the women dreamed of did not necessarily translate into reality, either.  Three of the four did not end up having happy lives and the other suffered through polio and in-law interference.

The book was written in such a way that each chapter was dedicated to a different woman and rotated and followed the order through out the book.  This at times, especially in the beginning when I was just starting to know the characters, was a bit confusing.  I kept having to refer back to the characters pictures in the middle of the book and sometimes even scanning back into the chapters to remind myself of whose story was whose.  It made each chapter sort of like a mini cliff hanger that you didn't come back to until you finished another chapter of each of the other 3 women's stories.  It definitely made it suspenseful so that I didn't want to put the book down but at the same time I can't help but think I would have slowed the reading a bit and would have been able to be more invested into each of their stories if I could have just read them in order.  But then the suspense wouldn't have been there in quite the same way, I guess.   All in all I love reading people's stories and how they deal with what is dealt them in life and this book didn't disappoint.  I really enjoyed the read.

Reading Challenge Goals Met:  A book set in a different country; a non-fiction; a book based on a true story;

This sounds like a book I would like so I'm going to look for it! Maybe my library has it! Thanks for the review.

Oh this sounds interesting!! I'm reading a nonfiction one right now but it is super serious and I am finding I'm taking notes (it's the latest Francis Chan one). I'm gonna have to look for THIS one at my library!

Your story reminds me my aunt (a German) who married an American just after the war. She had a rather easy start, Ellis Island had just been closed a week before her arrival. She had found a good man and we often visited her in the 80/90th. A friend of mine was less lucky, she fell in love with a young American soldier and ended up in a hole in Montana and was very unhappy ! It turned out that he had no work or money and she had to work in a slaughter house. It didn't last long and she came back to Belgium !

This sounds very interesting! It would be very hard to leave everything behind and go to another country, only to find prejudice there.

Great review. I hadn't heard of this one and it sounds like something I'd like to read!

This sounds really interesting! I'm adding it to my TBR list.