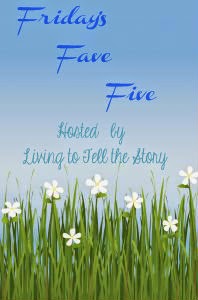 What a week it has been!  We took a little long weekend trip to another province to visit my oldest daughter.  We haven't seen her since Christmas so I was itching to get there and give my girl a big hug and have a nice relaxed visit.  Well, hugs it was but a relaxed visit...not so much.  Her province got an inordinate amount of rain.  Sunday her basement suite home flooded right before our very eyes.  With water pouring in we were scrambling to save her things moving it to a dry spot.  Then we had to rent a storage unit, on a Sunday no less, and move her out within a very short few hours.  Whew.  But in the midst of panic and craziness there were some moments to be thankful for.  Join us as we look for those moments even in the tougher weeks.

1.  We were there for her.  The first thankful moment was that we were there in the first place.  I'm so glad she didn't have to face that on her own.  We were able to offer both emotional support and a helping hand.

2.  We were actually in her place when the flooding started.  K and I had actually gone back to her place for something and were right there when the water started coming in.  So very thankful for that.  Had we not been her cats may have been in danger and things would surely have gotten wrecked.  Who knows when she would have gone back to her place, we could have been doing anything.  So thankful we were there and could act quickly.

3.  The fella moving in upstairs.  While the water came in the fella who was just moving in upstairs came down to use the dryer.  When he found out what was happening, he immediately got his two helpers and came down and moved the bigger items that were in the most vulnerable spots and moved them to the other end of the house, which was an empty room buying us some time.  So thankful for helpful neighbors.

4.  Coincidences, which I believe are not really coincidences but God's grace.  The fella moving in upstairs just happened to be in the sewer business.  He immediately knew it was not sewer back up but ground water pouring in.  He also knew that a hole in the floor was actually a former drain hole and knew there was a cap to take off.   The water started to immediately drain.   Thank God for his knowledge.  It helped to save a lot of K's things.  Very little was actually lost.

So many more things to be thankful for in the midst of the emergency.  No one was hurt, little was lost, her landlord immediately gave her the ok to ask the property management company for her damage deposit back so that she can start right away to look for another place.  The property management company said she'd have her cheque within 5 working days.  We had a work van and our Envoy to help her move her things, her boyfriend and his brother to help us move, the storage company was actually open on a Sunday, we made it in before it closed for the day, they gave her a decent price,  just to name a few.   And no matter what, it was still time spent with our beloved daughter and it was still a getaway for Hubby and I.

What were you thankful for this week?

Wow, you weren't kidding about the hectic visit! But what a time to be there to help out your daughter. Wonderful faves to be found in the crazy.

Oh my goodness, what an "adventure", it must have been awful to go through ! Fortunately you were there to help and support her !

DOn't you find it amazing that God puts us right where we need to be?! So glad you were there to help your daughter.

No coincidences here - but the tender mercies and grace of God. So glad you were there to help your daughter. Hope she can get moved into a new place quickly and that things go smoothly. Happy Friday!

So glad you were able to visit with your daughter and be there to help her in her flooding. What an awful thing to have happen to her!

Oh wow! So many things to be thankful for in the midst of an emergency situation. I'm astounded at God's blessings.

What a great testimony! I found out myself a couple years ago that just because you are a Christian, you are not immune to the troubles of life - such as a flood. But God is always there providing help if we can but see it! I'm so glad for all the good things you were able to notice in spite of the trial.

I bet she ends up with an even nicer place than she had because that is just like God!

Many blessings in the midst of trouble - so glad you were there to help your girl. That trip was a memory maker for sure!

Whoa!! That WAS a hectic weekend but look how God orchestrated everything!!! He is so faithful to keep us in the Palm of His Hand! Praying now that your daughter finds just the right place to call home. Enjoy the weekend!

I'm exhausted just reading about this! Water damage is just one of the worst things to deal with. I love what you said about coincidences. So glad that everything worked out in the end.