"The Heart's Pursuit by Robin Lee Hatcher" ~ A Review 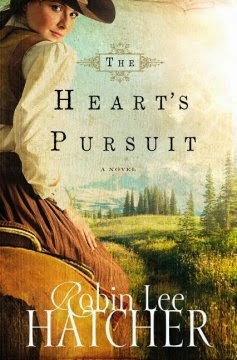 A Colorado beauty abandoned at the altar. A rugged bounty hunter haunted by his past.
In this dramatic historical novel by best-selling author Robin Lee Hatcher, two wounded hearts join forces in a pursuit across the Old West. Silver Matlock is a Colorado beauty in search of revenge against the man who stranded her at the altar and fled with the remnant of her family's fortune. She is determined to find the man who betrayed her trust. Jared Newman, rugged as the West itself, is relentless in his pursuit of lawless men---but unable to escape his own tragic past. Hardened by his life as a bounty hunter, he must learn to forgive before he loses his soul. Joining forces, the two set out in search of Silver's betrayer. The handsome but embittered Jared finds himself powerfully drawn to the beautiful woman whose drive for justice equals his own. But lack of honesty keeps Silver and Jared from fully trusting each other, even as a shocking revelation intensifies their pursuit of the cunning - and deadly - quarry.

My Thoughts:
The Heart's Pursuit is a historical romance of the inspirational genre with some mystery thrown in.  After a life time of never meeting her step mother's expectations Silver Matlock yet again has disappointed her by choosing the wrong man.  After being jilted at the alter the family also finds out that her fiance has stolen the family's funds and her stepmom's jewelry and Silver feels it's all her fault.  A little headstrong and impulsive she went into the relationship quickly.   In desperation Silver, much to the horror of her stepmom, hires a bounty hunter to find her fiance in the hopes of reclaiming her family's money before the bank forcloses on their mercantile store and home.  But what she doesn't tell her family is that she is riding with the bounty hunter to help him identify the man who robbed them.   Jared Newman became a bounty hunter in order to catch the man who killed his own family.  Having been raised in wealth he now has spent the last 6 years in pursuit of a man who he can only identify by a scar.  Taking on the job that Silver offers him is just a means to an end of finding his murderer, but he's not about to tell her that he has a hidden agenda.   When circumstances take a turn for the worst, they both must look deep within and refind their faith in someone other than themselves.
This story was an easy, enjoyable read that took the reader through several states as the pair pursued the criminal.  But in the process each had to come to terms with their pasts and their own issues of rejection, shame, hatred and revenge.  Each had to learn to forgive in order to move on with their lives.  I found their journey to that place interesting.  There are some twists to the plot which kept the story moving though I did figure out some of the story before the ending.  The romance is light and from the heart perspective not the lust perspective which was refreshing.  I'm not one for "falling in love with someone quickly" kinds of stories but this kept my interest anyway once I got over that aspect.  I liked that the characters were each presented as believers with flaws that were trying to find their way in awful circumstances.  Their struggles felt genuine and real for the circumstances and the author has a real knack at making the reader care for the characters and what they are going through in their hearts not just their circumstances.   Overall, I enjoyed the journey, both across the U.S. and in the heart of this story.

Thanks to BookLook Bloggers for providing this book free of charge in exchange for an honest review.  All thoughts and opinions expressed were my own.

For a sample reading or to purchase The Heart's Pursuit you can go here.

I LOVE historical fiction!! and Susanne....we really DO think alike. As i'm typing this, my ballerina girl is dancing at a special event, i dropped her off and went to get groceries and just sat down before having to go pick her up. I decided to log in to my blog and type up my latest book review...and lo and behold, the first thing I saw after logging in was YOUR book review!!!

I appreciate the more realistic portrayals Christians who struggle, too. Sounds like a good story, Susanne.