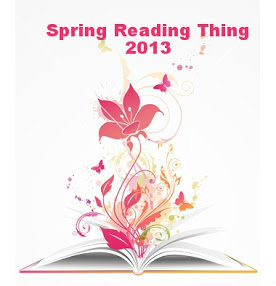 The Spring Reading Thing has begun.  As usual, I really look forward to this each year.  I've already begun compiling my list weeks ago in my head, going through my book baskets and my library lists.  This year Katrina has passed the torch to Sandra of The Musings of a Book Addict.  Thanks Sandra for picking that up!

This spring it was hard to decide what I wanted to read.  There are so many books in my baskets and boxes and my want to read list at the library is a couple hundred strong.  It's ridiculous really.  But I narrowed it down with choices from each and left a couple spots open for review books as they come along. I don't know how many I'll get through as I'm taking a Beth Moore course, Breaking Free,  and it is intense with tons of reading but I'm sure going to make a good stab at it.   So here we go.

Jesus: The Greatest Life of All by Chuck Swindoll - From my book basket. The last in the Great Lives from God's Word series. I've read several from this series and they are all really good.  "Jesus" seemed the perfect one to read for Easter.

Truth Stained Lies by Terri Blackstock - A review choice.  About three sisters trying to prove their brother innocent of murder. The fact that one of the characters is a blogger caught my eye.

False Pretenses by Kathy Herman - From my book basket.  This and the following 2 are a series set in Louisiana that I bought with a gift card from hubby.  About a woman with a secret past that comes back to haunt her.

Dangerous Mercy by Kathy Herman - About a woman who takes mercy on men from a halfway house and hires them to do odd jobs.  But when a series of murders happen her handymen become suspects.

Relentless Pursuit by Kathy Herman - A man searching for the sister he abandoned is led to a city where authorities fear a bio-terrorist is on the loose.

Iscariot - a novel by Tosca Lee - caught my eye at the library.  I've never read this author before but I was interested in the historical aspect about the Roman occupation of Israel and the uprisings that were occuring around the time of Jesus.  Interested to see how she deals with her thoughts on why Judas betrayed Jesus.  It's received lots of great reviews.

House of Secrets by Tracie Peterson - again out of the book basket.  I really need to stop buying books, whether used or new, for a long while until I get my pile under some semblance of control.  But I couldn't resist this from the library sale shelf.  An author I've really enjoy in the past and an interesting story of sisters with memories of a secret that one feels needs to be revealed.

Shades of Morning by Marlo Schalesky - a library choice.  About a woman content with her life when her estranged sister suddenly dies and makes her guardian of  a 14 year old boy she never knew existed.  And the boy has Down's Syndrome making her feel totally unprepared to care for him.

The Invitation by Anne Cherian - another library choice that I had no intention of getting but caught my eye and I couldn't leave behind.  Three college friends leave UCLA expecting successful lives and successful children but when they meet 25 years later, that success is jaded.  While each is trying to present the successful life perception, they are forced to deal with their problems and unmet expectations.

House of Prayer No. 2: A Writer's Journey Home by Mark Richard - have to throw an autobiography/memoir into the mix.  This looked interesting.  Told he had a crippling hip deformity that would put him into a wheelchair, the author sets out to see as much of the world as possible before his hips fail him.  This is his story of  his journey with pain, rebellion and faith.

Sacred Marriage by Gary Thomas - I've had this on the list before, started it a couple times but have gotten distracted with other books.  This time I'm determined to make it through.

My Life with George by Judith Summers - from my book basket.  A  "Marley" type of dog story starring a King Charles spaniel

The Edge of the World - A novel by Phil Callaway - picked this up when I saw him live.  I've enjoyed several of his non-fiction books and had no idea he's written a couple of fiction novels so I'm very curious. 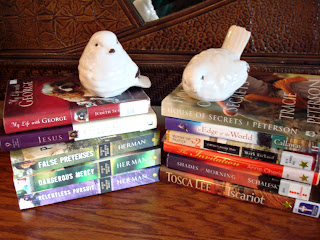 What are you reading this spring?

Looks like a good assortment of books - good luck with your challenge!

I didn't know anybody was taking this up since Katrina couldn't do ti this time, so I hadn't made in plans. I'll have to see if I can pull a list together. I've mainly been deciding at the end of each book what's next. :-)

I've been eying the books by Blackstock and Peterson you have there. I've enjoyed many of theirs.

looks like a great list! not sure if i'm gonna officially participate this time around...I WISH these challenges were in the summer when life is less hectic! but you know me....I ALWAYS have a non fiction book going AND a novel i'm reading since i don't watch TV really. I'm interested in that series you mentioned and the one about the boy with Downs (since I work with 2 boys who have that although they are little). I saw that my dad has this Blackstock book..i'll have to borrow it from him! :)

Dangerous Mercy seems like an intriguing concept for a book!

Here's to goals and opportunities to achieve them!

I have Iscariot on my list as well but I have it as an audio review. enjoy your books. Happy reading

I so enjoy seeing everyone's lists. I left myself lots of wiggle room this spring - I've not been reading much and am just not sure what will catch my fancy. Good luck on reading your way through your list.

Spring reading list? Doesn't it seem weird that it's nearly April? Of course, I am finally of the opinion that I'm ready for warmer weather...I think... :)

Anyway, looks like you have some great reading ahead!