Gail from More Than a Song requested my lentil soup recipe from my menu plan this week. So I thought "Hey, an automatic post!" Funny how you start thinking once you start blogging. But anyway, this soup is easy and my family loves it. It's a great warm me up type of food on a cold winter's day. And it's very healthy. (Well, except for the bacon fat, but I won't tell if you don't. ) What more could a person want? Now don't let the number of ingrediants scare you, it really does come together in about 10 minutes.
LENTIL SOUP
-1 500gr. pkg. (or 1/2 lb. for you south of the border) bacon
-1 medium onion, sliced
-2 large carrots, peeled and sliced (I cut them on the diagnal nice and big)
-1 large celery stalk, sliced
-1/4 tsp. celery seed, optional
-1 large clove garlic, pressed or finely chopped
-4 cups of water
-2 cups dried lentils (I use green lentils)
-1 chicken bouillon cube (I use tsp. liquid chicken oxo)
-2 tbsp. fresh snipped parsley (or 1 - 2 tsp. dried)
-1 tbsp. salt
-1/2 tsp. pepper
-1/2 tsp. dried thyme leaves
-1 bay leaf
-1 can (946 ml or 28 oz.) diced tomatoes
-1 cup water
Cut the bacon into 2 inch pieces and fry in a dutch oven until just brown. Don't overcook to crispness because it will still cook as the soup cooks. Remove and drain on paper towels.
Remove about half the fat leaving about 3 - 4 Tbsp. Add onion, carrot, celery, celery seed and garlic to pot and cook over medium heat until celery and onion is tender. (This last time I didn't have celery and just used the seed and the soup was still yummy). Add the bacon. 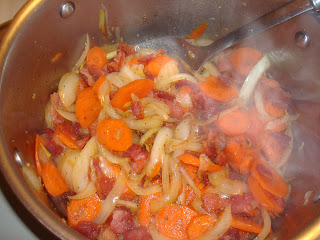 About this time the smell should be totally making your tastebuds go beserk in anticipation! About the only reason I'm posting this picture is to make your mouth water. Did I succeed?
Stir in the 4 cups of water, lentils, bouillon cube, parsley, salt, pepper, thyme and bay leaf. (Neighbors should be knocking on the door about now to find out what you're making for supper). Heat to boiling. Reduce heat, cover and simmer until the soup thickens, about 1 hour. Peek at it every once in a while and add a bit more water if you need to. You do not want it to dry out and burn to the bottom. 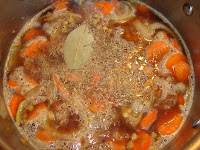 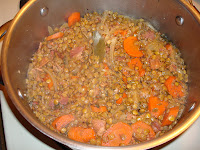 The pic on the right is how it looks when it started to simmer and the pic on the left is how it looks after an hour of simmering. See how the lentils have absorbed the water. I let it go a touch drier than I really like. Something to do with 7 rugrats demanding my attention. Anyway, you're almost done now.
Stir in the can of tomatoes with it's liquid and 1 cup water. (Now I used 2 cups water because I had let it go drier.) Simmer uncovered for 15 minutes and serve with thick bread or hot biscuits. Yum! 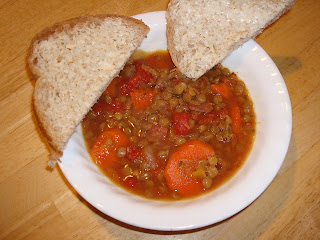 You are the soup queen--I love it!

Have a great weekend!

That looks really good! Thanks Susanne for posting it...I hope to try it soon. I love having pictures to go along with it!

Now I know what I want to cook for tomorrow evening's dinner....thanks!!

Thanks for this great recipe! I'll just admit right now that anything that has the first ingredient "bacon" is usually a hit around here, LOL.

This is the perfect recipe to post for the cold weather we're having. And it's almost identical to the recipe I use to make navy bean soup. I'm making a big pot tomorrow!

Oh thank you!!!for posting this yummy recipe.Thanks for the blog visit;=)and for your lovely comments on McKenna;)

Susanne - in thirty minutes I am going to start making my lentil soup. It is so similar to yours - the only real difference is I also put keilbasi (sp?) sausage in it. It is absolutely delicious and a real favorite of my husband's.
Enjoy!!

Oh yummy! I love lentil soup and your looks delicious...

YUM! Thanks for the weight conversion for us old timers down here.

Wha? Bacon fat is bad? Since when!?

Oh, I might actually like lentils with this recipe... but don't hold your breath for me to change my mind about brussell sprouts.