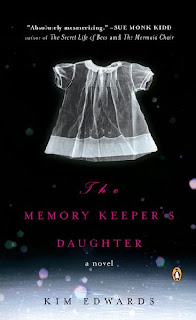 The Memory Keeper's Daughter is a first novel for Kim Edwards. It is a story starting in the 1960's and spanning over 25 years. It is a story one family and the on-going consequences each member pays for one split-second decision made by one member.
Dr. David Henry, a young doctor very much in love with his wife, is faced with delivering his own child when a snow storm prevents them from making it to the hospital. Going to his clinic which is closer, he along with his nurse help to deliver his baby boy. To his surprise, there is a twin delivered also by Norah, who is basically unconscious from medication. As soon as he holds the baby, Dr. Henry right away realizes the baby girl has Down's Syndrome. In a split second decision, he gives the baby to his nurse to take to an institution which was the method of the day in dealing with Down Syndrome children. He then informs Norah that she birthed a baby girl who died.
When Caroline takes the babe to the institution she finds the conditions deplorable. And there begins the journey of deception, secrets, dealing with loss and pain, and consequences of choices made. While Dr. Henry believed that he was making the right decision to protect his wife, whom he very much loved, from heartache, he could not have predicted the road that his family would travel from that decision.

With my background working with Down's Syndrome children and various other disabilities, I very much looked forward to reading this book. It grabbed me from beginning to end. Back in that time, when institutions where the way of handling children with disabilites combined with memories and undealt grief from his past, the character of David Henry was acting with the times. The level of it affecting all their lives comes from the decision to decieve his wife with it. I was totally caught up in their story and the nurses story and how a wrong decision even done with the best of motives can reverberate down through years and affect another generation. Kim Edwards did a lot of research into what was happening with families with Down Syndrome children at the time and it really comes through in different parts of the story. I thought the characters where well defined and real. I was however surprised at the ending. To me it was very abrupt and wrapped up too pat. I kept turning the pages thinking there was more but nope that was the end. In spite of that, I thought it was a great read that really involved my emotions and empathy for all the characters. Kim also provides questions at the back for reading groups or for individuals to work through. I will definitely be picking up Kim's next book.
Posted at 6:45 AM

I agree with everything you said, including being disappointed at the ending. I thought, "all that, for this?" But overall the book was excellent and really captured the times, even down to the student protests at Kent State, etc. I was especially touched by how the legacy of an event that David's wife (was it Norah?) didn't even grasp had such tragic consequences in her life...

I ditto your remarks. However, I liked the ending. It was as if Edwards was saying, "And life goes on..."

Glad you enjoyed it too. Now what's next on your plate?

I am waiting for that one at the library.

yikes - you know who - I keep forgetting to shift accounts :)

I read this book last winter, Susanne, and your review is dead on. I agree about the ending - it did seem a little abrupt after struggling through all the years with this family. But it's a wonderful book and I'll probably read it again someday. Great review.

You did a great job reviewing this book Susanne. I think it is one I'd like to read. I am always looking for a good book. Thanks so much.

I agree with you. Glad to know you finished it. I think I'll link and just say, "Ditto to Susann."

You make me want to go pick this book up right away. Sounds wonderful, except for the ending of course. At least I'll be prepared to be a little let down.

I'll put it on my book list with your warning about the ending in mind...

Great review Susanne! I read this book when it first came out and really enjoyed how I felt transported back in time.

I've been wanting to read this one but my library doesn't have it yet so I'll have to wait or buy it. But still think I want to read it. Great review Susanne!

I just finished this book today. I thought the ending was ok. I would have liked it to be a little different, but won't say anything for anyone who is going to read it. I also thought that her research was well done. I didn't realize that Down's children were treated that way so recently.

Thanks for the book review. Very good and detailed review.

This was a great read, I am a reader and for her first novel she did a wonderful job!!

Miss Paula: I thought she did a great novel for her first one and I look forward to her next. I tried to link back to your site but your blog is not listed in your profile, so I hope you might come back to read this.

Can you believe that's her first book?! I picked it up in the airport leaving for our cruise, and read the entire thing. Dark, depressing much of the time I thought, but I actually liked the ending.

Thanks for this review -- this is a book I've been very curious about.

This one is next on my list, the review was great, thanks! I will be very excited to get into it!
Jennifer

I really liked the book too, up until the ending. It kind of just ended, with leaving me hanging. I wonder if there will be another in a series. I like your site, lots of good books, I plan to read a lot this summer and will have to check back to your list :) Thanks!