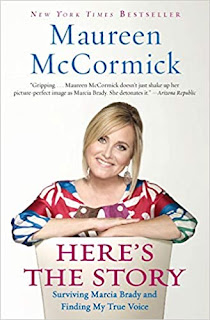 In the early '70's Marcia Brady was the ideal teenager, the one all the girls wanted to be and all the boys wanted to date.  But for Maureen McCormick life was anything but ideal.  In spite of playing Marcia on the hit sitcom, the Brady Bunch, and being one of the most recognized tv faces, real life for Maureen was anything but sunny.  In her memoir she honestly reveals what was really going on behind the sunny persona of Marcia Brady.  As she grew and Brady Bunch was cancelled, Maureen struggled with the perfect persona that was cast upon her and her life took a turn in parties and drugs as she tried to live up to the image the character of Marcia laid on her.
This book really took an honest look at Maureen's life and what she became after the Brady Bunch.  From major family dysfunction, to cocaine addiction, to wild parties, Maureen came to fight a battle she almost lost.  Two things saved her from ultimate descruction:  her new found faith in Jesus and finding her husband who stuck by her even in her ugliest moments even after becoming a Christian.  This book is raw and not pretty, but it is very honest, heartbreaking, emotional and ultimately triumphant as Maureen struggles through her whole life to live up to the perfection of Marcia's character.  While I found some of the earlier tellings of the Brady Bunch years a bit teenage angsty, her struggles and story is one worth the read if only to understand the pressure that is on child stars, some of it their own making and some we, as a star crazed society, put upon them.
I gave it a 6.5/10

I did not know she had become a Christian! I grew up with the Brady Bunch.

Yes, she was the girl that seemed to have everything, watching her television life and imagining that her real life was the same. It was all so unfair to her and to the girls watching. (and I was one of them!) It's so nice to learn about her success story. I didn't realize her faith was a part of that.

oh i loved her when i was a kid. I'd be interested in reading this. I know Judy Garland struggled as did Shirley Temple although she conquered the whole stardom thing and didn't turn wild. I didn't know Maureen became a Christian!! GLORY TO GOD!!

I used to watch The Brady Bunch all the time. I like biographies so I will look for this one. Thanks for the review.

A Painted House
by John Grisham

A Desperate Hope
by Elizabeth Camden

The Room on Rue Amelie
by Kristen Harmel

The Woman in the Window
by A.J. Finn

A Stranger in the House
by Shari Lapena