A Bridge Across the Ocean by Susan Meissner ~ Book Review 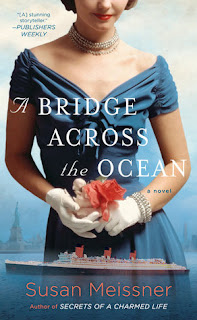 This is the story of 3 women.  Two are war brides from World War II traveling on the Queen Mary to join their husbands in America.  After surviving the horrors of war, one in France, the other in Germany they are hoping to start anew in the U.S.  But both hide deep secrets that they hope will never be found out.  One is a present day woman who is facing a huge decision with her husband.  But when an old aquaintance calls desperately requesting her assistance she must face the secrets she herself is trying to run away from.  Helping this person requires her to take a visit to the Queen Mary which is now docked in a city close to her.  What she finds causes her to dig into her secret in order to solve the mystery.

I had a real love/hate relationship with this story.  I love most works by this author and the cover is so beautiful it lulled me into requesting it for Christmas without first checking into a description.  But in reality the description on the back does would not have truly revealed to me what this story is really about.  First the good stuff:  Loved the story of the two women, Simone and Annaliese, from World War II and the heartache and horrors they faced and survived.  Loved the story and mystery that was developed between the two of them.  Their characters were richly told and very believable.  I was drawn right in and had a hard time putting the book down when their part of the story was being told.

What I didn't love or even like was the contemporary part of the story.  Brette is an individual who can see and communicate with "drifters",  ghosts of individuals who are stuck in a place between life and afterlife.  (This is not a spoiler as you learn this right at the beginning).  For whatever reason, they are unable to move on.  This so-called gift is passed along amongst some of the women in her maternal side of the family and no one knows who will get it and who won't.  Brette has been trying to suppress this gift on the advice of her aunt since childhood but when an old schoolmate desperately calls her for help it leads her to the Queen Mary, a ship which historically was used by royalty, then used during the war for battle and for transporting war brides and which is now docked, rumored to be haunted and offers historical tours.  When there, she encounters a drifter who is also desperately trying to show her something and she feels she must solve the mystery.  I felt this whole part of the story just detracted from the wonderfully written historical part.  The ending concerning the drifter and the ship was just weird and left me disappointed.  The whole ghost thing was distracting to me and I wish the story and it's mysteries could have been told without the ghost narrative.   Though I love this author usually, she is one of my favorites, this is now the second book I've read from her that has had a ghost involved.  I think I will be checking reviews a bit better to get a better gist of what her story is about seeing as how the back of the book description didn't let me in on any of this (all it said was the character visits the famously haunted Queen Mary...I did not get from that that this was going to be a story who's major plot would be about communicating with "drifters".  I don't know maybe I'm dense and don't read between the lines well).  Ghost stories are definitely not my cup of tea and I feel if a book who's major storyline is going to be about ghosts maybe make that a little more clear in the description?

I haven't read this author. I am intrigued by the first part of the story, the historical aspect, but the second almost sounds like a different book. BTW, I've decided to reread Ann Spangler's book this year for my daily devotions. I guess that's the advantage of having a poor memory. It's all brand new to me! Hahah!

Thanks for this review. She is one of my fav authors too and I would have wanted to read this book.
But I dislike and don't feel 'spiritually right' when reading about ghosts, etc., so I won't bother with this book.

Wow, I am so surprised! I've enjoyed a few of her other books with a view to reading more, but I am also going to be very cautious with what I read of hers from now on.

Iactually never even heard of this author until you reviewed one of her other books.....I think it was you.....i probably wouldnt' like this one....that kind of stuff bugs me. One of the picoult books I read a few years ago leaned that way too and I was shocked as none of her other ones had that weird "spiritually dark " component. I'll def pass on this.