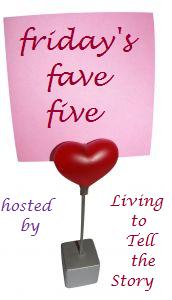 Hi everyone!  Welcome to Fave Fives.  So glad you could come and join in on looking for the blessings of life.  At least for this last week.

1.  Pineapple anything and everything.  I've just been craving pineapple so I broke down and actually bought the packaged, peeled, cut in spears pineapple at Costco.  Yes, I know it's more expensive but the craving hit and what's a girl to do?  It was one of sweetest, most delicious pineapples I've had since eating it right from the plantations in Hawaii way back in '88.  (Man, that sentence makes me sound old.)  And then I splurged on a pineapple juice from the dairy case at the grocery.  Not as good but it hit the craving.

2.  A small chuckle in the middle of a root canal.  What?  Another root canal you say?  Yes, and I was just as shocked as you.  I went in because I thought I lost a filling.  I lost a filling alright and because the root was compromised, a root canal it turned out to be.  So while the dentist was working away, I had my eyes closed to the bright light above his head that was causing my headache to loudly protest. All of a sudden I smelt something strange, and I thought, jeez that smells like something burning.  Then I smelt it again.  Light or no light, I gingerly opened my eyes just a tad.  Just enough to see a curly que puff of smoke.  Rising from my mouth, no less. What on earth?   It was so bizarre I had to have a quiet inward laugh.  A moment of levity in a not liked situation.

3.  Cooking my husband his favorite dinner for valentines and the anticipation of his reaction when he came home from work.  We never go out of Valentine's.  Neither of us like long line ups, or overcrowded restaurants, or being herded through as fast as possible on a very busy eating out night.  So instead, I cooked his favorite dinner, unbeknowst to him.  He thought it was going to be left overs because of the unexpected root canal in the morning.  But I made it for him, whether I could eat or not. He was a very happy camper when he came home and realized what was on the stove.  It brought me joy to do it for him.  Even I was able to enjoy some of it.

It's official name is Braised Pork and Vegetables.  It's from my very first cookbook ever, an old Betty Crocker from the early '80's.  I've always thought the dish sorely needed a name change, because it is way better than that name makes it sound.  I tried to find the recipe thinking I had to have posted it at sometime, but I couldn't find it.  So maybe that will be a post for next week!

4.  My favorite chocolates.  A gift from my Valentine.  Also known as hubby.  I know I've mentioned a bazillion times but these chocolates are my absolute favorites.  And he got me the big chocolate heart with one of each flavor inside.  Swoon.   I'm in chocolate heaven.   My favorites are the creme fraiche ones.

5.  The long weekend this weekend.  It's been a bit of a hectic week and I'm really looking forward to a nice weekend.

What made your blessings list for this last week?

Hmmm, a surprise root canal makes the fives? An unstoppable pineapple craving in February? Are you okay, Susanne? You know I'm kidding. I love how you and your hubby know how to make each other smile this week as you celebrated Valentine's day together. Happy relaxing weekend.

Oprah tweeted about those chocolates? They must be good! I was hoping to win some chocolates from the Green Gables chocolate store but no luck.

Looking forward to your recipe.

Hope you have a wonderful, relaxing weekend Susanne.

OMgosh I cracked up at your root canal experience. I've only had one root canal in my life and I didn't see smoke! LOL..i would have been praying out loud if i did! LOL....
And i didn't know your hubby's name is Dave!! man, we DO have a lot in common, Susanne! Why do Canadians have a long weekend? i know for us here in the States, we are celebrating Washington and Lincoln's birthdays on MOnday. I have the entire week off as here in eastern NY most public schools are closed due to winter break. I think those Valentine's chocolates are perfect and i love that you made your hubby a special dinner! enjoy your long wkend!!

I love pineapples, too! I'm curious to see the recipe for Dave's Fave :). Those chocolates look so yummy. Enjoy your long weekend!

How sweet, cooking your husband's favorite meal even after your unscheduled root canal. And those chocolates sure look good!

My hubby loves pineapples! And they are great.

Wow, a root canal this week? You're good at sniffing out the blessings, Susanne, even in the midst of a root canal. Hope your next week is uneventful but still filled with blessings!

I do love pineapple so completely understand your craving. Struth! That root canal sounds awful, I have a terrible fear of the dentist so I do think you were very brave....dragon breath or not!lol xxxxxx

I think I would have freaked out at the puff of smoke coming from my mouth! Did you find out what that was? Or maybe it's better not to know...

We don't go out on Valentine's Day for the same reason. Last time we tried we had seven all together, at Outback, and they had taken out their big tables to put in more 2-person tables for Valentine's Day. Took half of forever to get seated.

I have an old falling-apart Betty Crocker cookbook -- will have to check for that recipe. So sweet that you were able to make that after such n encounter at the dentist's.

HAVE to have chocolate for Valentine's Day! It's in our vows somewhere. :-) Those look good.

My old old cookbooks are my best friends. They taught me to cook. We remake all the best recipes from them, don't we?

Chocolates? Mmmm. Yes there are chocolates in the house. At least there were yesterday :)

Oh I can relate with the root canal and the smoke coming out of my mouth! Haha! I had one done back in Dec. A little unnerving isn't it?
Pineapple is so good for you, especially fresh. It has bromelain which is a great remedy for inflammation...which very well could have helped before and after your root canal?
I couldn't join in today, but wanted to still stop by. I enjoy reading about everyone's week!

Enjoy your chocolates and long weekend.

It's good that you can laugh about that root canal situation. Can you eat the chocolate heart "container," too, after you've finished the contents? Mmm. I just made the salad with the canned pineapples and oranges and a sour cream dressing this past week. Must be the time of year to crave citrus. I'm a little curious: I know in the U.S., this upcoming weekend is President's Day weekend -- Monday is a federal holiday -- is there a Canadian holiday that's giving you a long weekend as well?

So you looked like a volcano at the dentist, lol ! How awful, I hate dentists ! We never have celebrated Valentine's day, because 45 years ago it didn't exist. And after that we never thought about !

Yummm, those chocolates look wonderful! I love a good chocolate! Sorry about your root canal, but I am glad you could find some humor in it!