About a month ago, at the grocery store, I came upon a deal I absolutely could not refuse. Five thick strip loin steaks for under $20. Now I don't know about where you live but that is next to a miracle. It's basically about half the price. So I grabbed a package (and now totally wished I have grabbed two or three) thinking that surely spring was right around the corner and we'd have some grilling weather soon. Well a month later, and winter still hanging around, those five little steaks were calling my name out every time I opened the freezer.

Finally Saturday night I couldn't stand it anymore. So I heeded their call and put them in the fridge to start thawing for Sunday dinner, thinking I'd grill even if it was a little cool outside. And then it happened. Sometime in the middle of the night gale force winds howled and we woke up to blizzard warnings and this covering the bar-b-que. 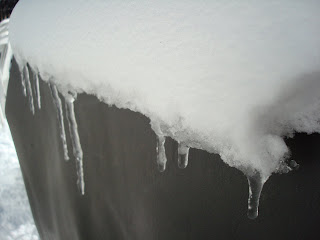 Sigh. I should've known better. Isn't there some kind of Murphy's Law for grilling that says if you roll the dice with expensive steaks too early in the year, the bells will ring somewhere and set some cosmic occurence into motion whereby a blizzard will blow in for sure.

But I had them steaks thawing. And I would not be deterred. So I did what any good little wifey who promised her hubby steaks for dinner would do. I broke out the George Foreman grill. Not as good as the Bar-B-Que but it'll do. So Sunday morning before church these babies got a soaker bath in in some marinade and back in the fridge till we came home. 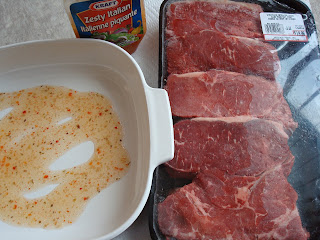 Then into the George Foreman, also known as the tanning booth, they went for 13 minutes (almost well done). 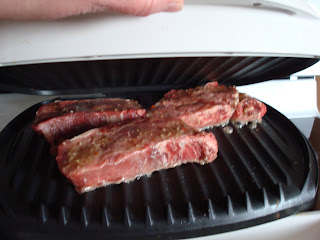 Yummy. Can't you just hear the sizzle and smell that goodness? 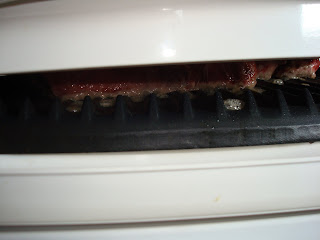 Fresh cracked pepper and a tiny dollop of butter melted on top and they were done. 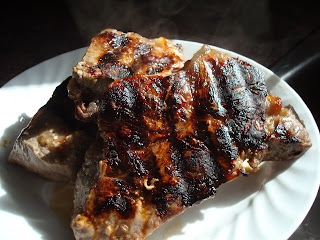 Served with a mountain of these: 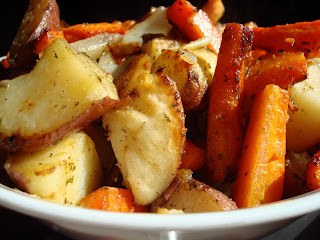 we could almost forget the -22*C (-7*F) outside and taste the spring and forget about this outside: 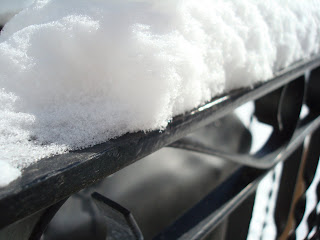 Almost. Now if we could just feel it, darn it.

-1 large onion, peeled, quartered and each quarter cut in half

-2 tsp. seasoning. I used Watkins Potato Salad Seasoning this time. You can use any that you would like such as Italian, Greek, Cajun, Mrs. Dash, etc.

Mix all in a small roaster or 13x9 pan and bake at 450*F for 40 minutes or until tender. Taste at the end of baking and then salt to taste if desired.

You had me cracking up!!!
I will NOT let the snow win however.. and I grill all year round... I'm going to show that snow!!!
We had 50's alllllllllll weekend.. I listened to the snow melt... ONLY to wake up this morning with INCHES of that white stuff COVERING up my patches of grass that were free.. and ready to grow... UGH

I even got to experience the cold and snow in Seattle last week and on Sunday. Now I hear the snow is falling today too. Yikes this is some winter for y'all. I'm glad that plan 2 was successful. The steaks and veggies look amazing :0)

Sorry you had to forego the ourdoor grilling -- those looked like very nice steaks for a nice charcoal grill.

Oh, because my sickness, I can now see I missed a LOT on your blog. Sure feels good to be back perusin' your posts. Those veggies look delicious!

I've been wondering about getting a Foreman grill.

I'm totally not a meat eater but now I'm craving a steak! There is just something about a grilled steak that says spring and summer. Our BBQ isn't covered in ice but hubby's not up to BBQing in the -12 weather. Whatever!

I can relate with the weather!!!! and the steaks looks yummy.

Looks like you had a great meal despite the weather!

That looks so amazingly good. MMMmm! I am jealous!

YUM those looks SO good Susanne.

Those look so yummy! I've been known to send my hubby out on a snowy patio and do some grilling in the middle of winter. But I don't think our cold is quite as cold as yours. If we had to remove snow from the grill, we would opt for the george foreman as well.

Murphy's Law it seems is a cosmic conspiracy :)

We experience variations of the Murphy's Law in the monsoons.

It looks really cold there....it may be 80 here today...i see you rolling your eyes..lol...but tomorrow back to 29...so you know it happens.
the steaks look great...we grilled over the weekend...it gives you hope that summer will be here soon.

I have a roasted veggie recipe very similar to this one. I add one sweet potato, cubed the same size. It adds a bit of sweetness.

I hope you understand that "wherefore" means "why" or "for what reason" and not "where". Take care :)