The Beast Resides in Casa Living To Tell

I'm an idiot. I don't know why it's so hard to say goodbye to this thing. Linda calls it the Beast, with a capital B. I just try to ignore it. It came to reside with great gusto in our home a couple of years ago. It's done it's part as part of the household maybe a dozen times at the most. For the most part it's a space hog, tripping the most unsuspecting person trying to get by it. And if not very careful, the most naieve of the unsuspecting walker byer (is that a word?) might get clobbered by one of it's long arms.

Great expectations were put upon this "beast" when he came to live here. But alas, he couldn't live up to them. So come this month both hubby and I have been in a mood to get rid of "stuff". The overwhelming, unused, useless cluttery stuff that is just "there". And the beast fell under this category.
So why is my stomach in a knot? Why do I have these panicky feelings of seeing that thing go out the door? Even the thought of the cash in hand is not making me feel better. Others would scoff at such crazy feelings. Has the beast become such a part of the decor that I've become attached? Have I developed an affectionate feeling of familiarity as I trip over it's feet one more time? Or is it because it is a glaring symbol to the buyer that I was a get in shape failure, that my extra poundage is still hanging on to my back side? That my great plans of continueing on with an exercise routine outside of the gym have crumbled in heap at the feet of my scale? Sigh. 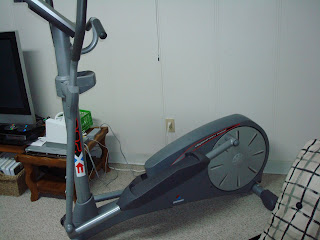 So, the treadmill went out the door last week as did the Bow Flex. And what of the beast? It went too. It went nicely into the corner of the tv room downstairs. Yes, it still resides here. I can no longer ignore him. Now that it's two buddies of torture are gone there is much more room for him and he is much comfier. I have talked myself into getting on it for short bursts throughout the day. 'Cause a few short bursts are better than doing nothin' at all. Right? RIGHT?! Sigh. I'll let you know how this great plan goes or if the beast is yet to see it's eviction in the coming months. Who invented exercise anyway?
Posted at 7:38 AM

hee, hee! My treadmill beast died
(#2 son had a great story about the death) It still hasn't gotten taken out. Here in Cali we have a bowflex that was folded quite nicely in the garage for 2 years but we are actually using it right now. Don't know how long that will last...
You crack me up Susanne. Looking forward to seeing what happens to the lone beast...

My beast is living in a cage on the porch. I do want to bring it in and comfort it with attention-- as soon as I can find a spot for it. I DID use it before, really I did!

Too funny! I've got one of those elliptical beasts and it's getting more attention - mostly from the cats, unfortunately... They think it's a game to jump on the panel when a human is trying to work the beast.

Legend has it that in medieval times, they used the treadmill as a torture device.

Too funny, we finally got rid of our coat hanger, I mean Treadmill, not too long ago! LOL! I just did not have the willpower, but I look forward to hearing about your progress! I have been really enjoying your blog and I hope you don't mind, I have added you to my Blogroll. I would like to add your Friday 5 button, but I just can't figure out how??

Funny!!! I've never owned one but....with power walking I am finding I should probably get one since I HATE To power walk in the frigid temps. SO...I've been getting my exercise with the Wii games. That counts, doesn't it? (I do tennis, bowling and baseball). The tennis seems to be a good work out. At least my heart is racing by the time I'm done!

I think it's hard to get rid of them because they represent hope for change! And yes, spurts are really good for you.

Hi Susanne,
This is Geri from Significant Pieces; you commented on my blog. Thank you for welcoming me and thank you for giving this boring blog a shot. I hope to get on it tonight, but first I am trying to design it. This is harder then it looks. I am honored that you wrote to me. Geri

It's official. I now no of not a single person who has not gotten rid of the treadmill they bought. I'm serious. I don't know anyone who kept it.

So maybe I was smart to just not get one in the first place, right? Wrong. I think I was just lazy.

The biggest complaint seems to be that they take up so much space and really, where on earth do you put them, unless you have a spare room or a basement, which I don't.

Besides, anyone who chases after a whole houseful of little ones five days a week is probably getting enough exercise!

it's not like I was using it anyway, it was just in the way and very annoying and the kids kept asking if they could ride on it like it was some sort of roller coaster or whatever. UGH! LOL

Ever notice how exercise and exorcism look and sound so very much alike?

If I had a beast or a bowflex, would I actually use them? Nah.

Dennis and I have NEVER bought one. But Neal-14 has a weight set that doubles as a clothes rack. At least it's useful while it sits gathering dust!

So cute, Susanne...
I have one of these...and "air stepper" type of thing that I use once in a great while and hubby wants me to get rid of...hehe

Now that I just got Wii Fit for Christmas, though, I have to say... I actually like exercise! I guess there's some variety with it and my virtual coach is nice...I named him Raoul. :)
Of course...there's with it, there's no handlebars to hang clothes on...sigh...;)

I think we get attached to the promise of something more than the actual thing. I'm proud of you for being strong!

I have a love/hate relationship with my elliptical. Those things are HARD!

I sent my treadmill to live in the garage. I still have hopes of putting it to use. You can do it! Keep us posted.