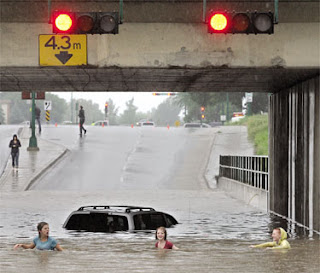 Well, you might say that our Canada Day plans & celebrations yesterday were all awash. Literally. In the early afternoon our fair city was hit with a superstorm. A big old thunderstorm rolled through flashing it's lightening and dumping it's contents to the tune of 21 mm of rain in one hour. In four hours our city recieved 44 mm of rain. Our usual is 37 mm in the whole month of July. To say it rained is a major understatement. Roads had to be shut down, underpasses were totally flooded with water up to the roofs of cars, some streets were floating in ankle and calf deep water. The mayor declared a local state of emergency which was still in effect 10 hours later. (That's a fancy way of saying the council can make decisions like telling people they can't do laundry, run dishwashers, take showers, and ask them not to flush toilets unless absolutely necessary. And to be able to call in whatever expert they need to, to help out). Everything, including fireworks was cancelled. So yeah, I spent Canada Day celebrating with a hot cup of coffee, my fave pizza and Julie Andrews and Christopher Plummer singing to me from the Austrian mountains and doing this post while occasionally checking my basement to make sure we weren't floating away. 'Cause I'm just a real party animal and all.

Anyway, Shannon at Rocks in my Dryer is hosting a themed Works for Me Wednesday week, with that theme being recipes with 5 ingrediants or less. I can hardly wait to read all the great easy recipes from all you guys. And here's a few that have been hits around here. We'll just pretend salt and pepper and oil don't count as ingrediants. Summer and easy go hand in hand.
Marinated Vegetable Salad
-Kraft Greek Dressing with Feta and Oregano
-2 large, ripe tomatoes
-1 red onion, thinly sliced
-1 can sliced black olives
-1 cucmber or zuchhini cut into chunks
At least 2 hours before serving, mix all ingrediants together in glass bowl. Refridgerate stirring occasionally until ready to serve. Drain or serve with a slotted spoon.
Of course, you don't have to limit yourself to the 5 ingrediants. Use these as a base and then add any fresh vegetables you desire. The key is marinating them for a length of time. The longer the better.
Rakott Krumpli (Layered Potatoes)
-6 to 8 potatoes, washed
-4 to 5 hard boiled eggs, sliced
-1/2 cup (250 ml) sour cream
-1/2 lb. (1/4 kg) Hungarian sausage (or garlic, ham or ukrainian sausage), cooked and cut in slices
-1 onion, thinly sliced
Boil the potatoes in their skins. Drain and let cool until easy to handle. Peel and cut into thin slices.
In a buttered casserole, place a layer of potatoes. Sprinkle lightly with salt and fresh ground pepper if desired. Then add a layer of onion, then egg. Top with sausage slices. Place half the sour cream by tablespoons around the casserole and spread as best as possible. It won't be perfect. Repeat layering ending with a layer of potatoes. Cover with sour cream.
Bake at 350*F until top is browning and heated through.
This is a main dish but if you want to use it as a side, just remove the meat out it. It's so good.
Garlic Lime Chicken
-6 to 8 chicken breasts
-3 garlic cloves, crushed
-2 Tbsp. fresh, chopped basil or 1-2 tsp. dried sweet basil
-1/4 lime juice, fresh or Real Lime
-2 Tbsp. olive oil
Combine all ingrediants except chicken. Add the chicken and toss. Refridgerate, covered and let marinade for 2 hours, shaking or tossing chicken ocassionally during marinading time.
Grill on medium-high heat until cooked through and juices run clear.
This may also be baked at 425*F, covered for 50 - 60 minutes.
Posted at 6:57 AM

Hi Susanne Oh my word that is alot of rain! I never heard about the weather there..yikes..I look forward to trying the chicken recipe..

OMG what a terrible flood. But on a rainy day what could be better than watching a favorite movie in a warm house. "The Sound of Music" isn't in my collection, but you have me once again thinking that perhaps it should be. I just watched "Around the World in 80 Days" again. Not the recent one, the one that got the Best Picture Oscar in 1956.

Wow! That rain was amazing! So sorry it messed up your Canada Day. Still, it sounds like you had a good day anyway.

Thanks for the recipes, Susanne. You must be an amazing cook.

Oh my goodness. The one evening I don't have the news on while cooking dinner (I was outside manning the grill!). I feel bad about your Canada Day....hope your basement is ok.

All these recipes look great..I don't have time to do this today but maybe next wed I can post a recipe.

BTW: that recipe for lime chicken is one I have made before and we LOVED it!!

Oh my word, Susanne. That's a LOT of rain to get in such a short time. I've seen rain like that on the eastern slope, around Denver, but never out here in the west. Yes, I'd say your holiday plans were just a little dampened.

Your recipes sound wonderful. I agree with you - fewer ingredients and quick, easy recipes are perfect for summer.

Wow that rain is just crazy!

That was some storm! Hope that wasn't your car under water. (Janes Blog)

OH WOW! Susanne...how incredible! I'm so sorry your town had this flooding and had to cancel all the celebrations!
But watching The Sound of Music is something I would have probably done, too!
Stay dry!
Hugs,
~Tammy

Our Home Schooler and Jen said...

Yikes!!
I love how you turn adversity into a relaxing evening at home...

I'm so sorry you got flooded. That is a lot of rain an so short a time.
We have had several very hot days but tonight the sho has that look that says 'Storm Coming"
It's clouded over and there is a golden glow.
I hope the water receeds soon and you can be out and about.

That is a ton of rain! Hope your basement is ok.

WOW! I thought we had a lot of rain with our storm that came through yesterday. AHEM... we had a few drops in comparison!

WOw that is a TON of raiN!

I can never manage to be Wordless either, LOL.

Love those recipes. I think I will try each of them.

SO sorry for all the rain... how I wish you could send it here! I'm sorry it dampened the outdoor fun, but it sounds like you found a few "favorite things" to brighten up the celebration. I LOVE that movie, and the chicken recipe sounds wonderful!

Goondess, I'm sorry about the awful Canada Day! Hopefully it will be better next year!

I stopped at the rain part that was measured out in metrics. I swear we Americans just never got that - I read it and had no idea how much rain you got. The photo told it all however. I read this morning that we've had rain all but two days since summer officially began. I'm pretty sick of it myself.

That is unbelievable! Oh my....

My Name is Eva
by Suzanne Goldring

The Line Between
by Tosca Lee

The Book Woman of Troublesome Creek
by Kim Michele Richardson

Being Mortal
by Atul Gawande